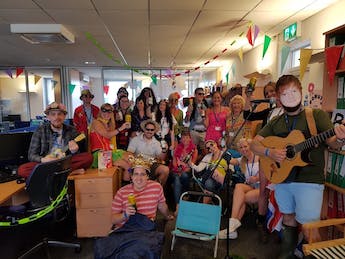 Over £2,000 raised for local charity and Grenfell Tower victims

Claims Consortium Group raised £2067 at its annual charity day on Friday 23 June, a joint fundraising event to raise money for local charity Stand Against Violence (SAV) and victims of the Grenfell Tower fire in London.

Staff put on a range of fundraising activities throughout the day, starting with breakfast baps, followed by games, BBQ lunch and a bake sale. Teams competed to win ‘Best dressed’ in the fancy dress competition – with ‘Glastonbury’ scooping the prize.

Claims Consortium is the main sponsor for SAV, and the day is just one of many fundraising activities that take place throughout the year.

Debbie Mawer, Director of People and Culture, and Head of the company’s Charity Committee, said: “Our annual charity day is an important event in our fundraising calendar. It’s a great way to raise money for Stand Against Violence, and also to support other causes or charities close to the hearts of our staff – in this case, Grenfell Tower.

“Although the day has a serious purpose, we encourage everyone to get involved and to have fun doing so!”