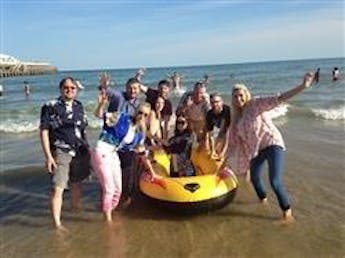 Intrepid treasure hunters swapped spanners and clipboards for treasure maps and spades in the aid of charity in July on a treasure hunt organised by LV=.

We joined LV= along with other suppliers on the beaches of Bournemouth in search of treasure to raise money for two charities – Hope For Food and the long-established Insurance Charities.

Most people donned floral shirts and flip-flops while taking part in an evening of games and fundraising which ended with a buffet supper.

Jeremy Hyams, CEO of Property Consortium Group, commented: “I’ve always placed a strong emphasis on our activities with community and charity, and we were really pleased to be invited to join our client LV= in this innovative fundraising event. The treasure hunt evening was just one of a number of charity activities they regularly undertake to support good causes.

“Everyone threw themselves into the games and the atmosphere was highly competitive as each team was determined to win, though I am proud to say that Property Consortium won the event.”

The London-based Insurance Charities has supported members of the insurance industry and their dependants during times of financial crisis since 1902, while Hope For Food is a Bournemouth-based food bank and soup kitchen for poor families in the area.

Hope For Food currently feeds around 80 local people on Tuesday and Thursday evenings at St Andrews URC, Richmond Hill, and on Saturday evenings at Cotlands Rd Car Park. It also distributes food, clothing and essential supplies to those in need.

Insurance Charities is the charity for the British Islands and Republic of Ireland insurance industry. It was founded in 1902 in order to give practical and financial help to past and present employees of the insurance industry. The charity has helped many thousands of people, both young and old, struggling to cope with challenges such as serious illness and disability.

The evening’s event raised just under £5,000, which is a great achievement for all who participated. We’re already looking forward to next year’s event.