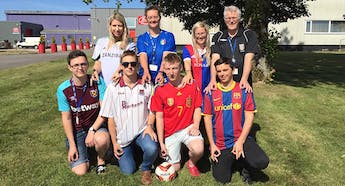 Games, BBQ lunches, and the Charity Day tradition of ‘soaking the CEO’ were just some of the fundraising activities that staff got involved with. Teams also competed to win ‘Best Dressed’ in the World Cup themed fancy dress competition.

Claims Consortium hosts a range of fundraising activities each year, led by the Charity Committee. Claims Consortium is a main sponsor for SAV, and also supports a number of other charities throughout the year.

Debbie Mawer, Director of People and Culture at Claims Consortium said: “This year was another fun and successful year for our company Charity Day. Everyone enjoyed getting involved with various activities, and better yet it was all for a great cause – supporting our main charity SAV as well as charities close to the hearts of our staff.

“Charity Day is one of our highlights of the year, and it’s great to see everyone having fun while also serving a serious purpose. Well done to everyone who was involved – we’re looking forward to next year already!”