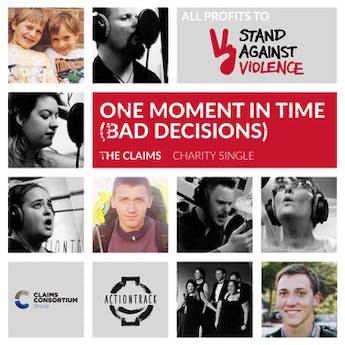 A team of musicians and singers working at Claims Consortium have collaborated to write and perform a charity single.

The track, called “One Moment in Time (Bad Decisions)”, has been released in aid of our charity of the year, Stand Against Violence.

It is available major download sites including iTunes and Google Play from 79p, with all proceeds going to the charity. The video is on YouTube and can also be streamed through Spotify. All channels will contribute financially to the charity.

Adam Fouracre, CEO of Stand Against Violence, said. “At this time of year there is an increase in drink-related violence among 13 to 16 year olds. It’s the perfect time to remind people of our message, and this song will appeal to a very broad audience who love great music. So please support us by downloading this great track.”

Jeremy Hyams, CEO of Claims Consortium, was delighted to back the idea. He said: “Our staff have had some great fun making this single, and while it has taken many weeks of hard work the results have been well worth it. I hope people will spend a few listening, watching or buying the track. What they’ve achieved really does rock.”

The single has been a collaborative approach between local organisations. The idea came from staff at Claims Consortium staff, who formed a band and choir called The Claims to make it happen. They wrote the music and lyrics, and performed all the instrument and vocal parts to give the song a real ‘rock’ feel.

It was recorded free of charge at Actiontrack studios in Taunton, who mastered the single. The Oxygen Agency produced the video which can be seen on YouTube.