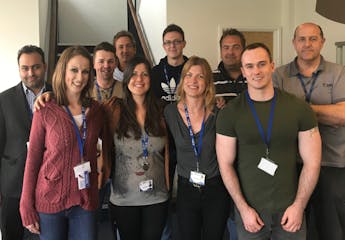 Staff at Claims Consortium have set themselves a mountain to climb – or indeed three – in their bid to raise £10,000 for research into dementia as part of the industry movement, Insurance United Against Dementia (IUAD).

Claims Consortium’s team of 15 has started training for the challenge to climb the three highest peaks in England, Scotland and Wales – Ben Nevis, at 1344 meters, then Scafell Pike at 978 meters, and finishing at Snowden at 1085 meters – in just 24 hours this August. They’re calling other businesses in the industry to pull together their own teams and join them on the mountains!

Our CEO Jeremy Hyams says: “We’re enormously excited to be joining the IUAD movement to take on the 21st century’s biggest killer. We’re one of the first businesses to join the movement from the claims industry and we’re looking forward to flying the flag among our networks.

“Our team goal is to raise £10,000. But with other teams on board we could take this much further together, in our support of research into dementia.”

Chris Wallace, chairman of Insurance United Against Dementia, said: “It’s fantastic to see Claims Consortium getting behind the IUAD campaign. With half of us affected by dementia – either through diagnosis ourselves or through caring for a loved one – the time to act is now. I’m delighted to count Claims Consortium amongst our supporters who are taking action to bring us closer to new treatments for people with dementia. By taking on such a big challenge, the Claims Consortium team are bringing dementia into the spotlight, and paving the way in transforming people’s awareness and attitudes towards dementia.”

Jeremy adds that this is just one of a range of initiatives the company is planning as part of the IUAD movement: “This is just the start. We’ve pledged to raise £10,000 and will be both supporting our colleagues and encouraging the businesses we deal with to back our initiatives too. I’m keen to hear from anyone who would like to raise a team as we are.”

IUAD is an Alzheimer’s Society movement created and championed by leaders from across the insurance industry. It aims to raise £10 million to fund vital research into dementia.

To find out more about IUAD and how Alzheimer’s Society is working with the insurance industry, visit alzheimers.org.uk/iuad.