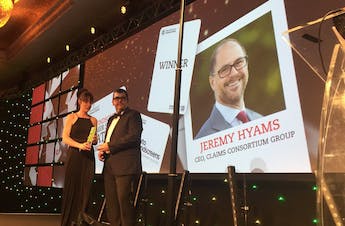 Claims Consortium’s CEO Jeremy Hyams has been announced as winner of the Customer Service Strategic Leadership Award at the 2018 Customer Satisfaction Awards.

The award was announced by the Institute of Customer Service’s conference and awards event at a packed Hilton Park Lane in London last night (6 March).

Jeremy Hyams said: “I am truly amazed to have received this award, but as a leader I know that the award belongs to far more people than just me. My team of staff and partner organisations have embraced my desire to put customers at the heart of our business, and it is humbling to have their achievements recognised at the highest level.”

“The awards are judged by an independent panel of customer service experts which makes this even more special.”

The awards are seen as the UK’s most authoritative customer service event, and Claims Consortium was also shortlisted in two other awards on the night. This is their second award in a row, having won the UK Customer Satisfaction Innovation award in 2017.

Claims Consortium was also announced in the top 100 mid-sized employers in the Sunday Times Best Companies To Work For list in February, for the second year running.