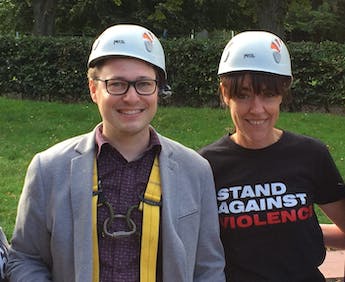 Claims Consortium Group has extended its support of Taunton charity Stand Against Violence (SAV) for the fifth year running, committing to donate £7,000.

Claims Consortium has been the main sponsor of SAV since 2014, and has hosted a wide range of fundraising events and initiatives for the small charity, including sponsored swims, fancy dress days and even a charity single.

Jeremy Hyams, Claims Consortium CEO, has been a strong supporter of SAV since it was formed, and has joined the charity as a Non-Executive Director. He said: “We are very proud to continue our support for Stand Against Violence. The charity does brilliant work bringing anti-violence messages to schools, and it’s a charity that has become close to the hearts of many of us at Claims Consortium.

“The fundraising activities, volunteering and advice we’ve given over the years is just as important as our financial commitment, and it’s great to see so many people at the company get involved in supporting the charity. Here’s to another successful year ahead!”

Claims Consortium’s Director of People and Culture, Debbie Mawer, and Technical Director, Tom Burroughs are also on the charity’s board of trustees.

Adam Fouracre, the founder of SAV and the charity’s Chief Executive, said: “Our relationship with Claims Consortium has strengthened into a robust and supportive one over the five year partnership, and we are delighted that the company has decided to extend its support for another year.

“Business support, both financially and hands-on, is essential to a charity like SAV. Claims Consortium is a brilliant example of how a business can really maximises on their support, and how a partnership like this can benefit both the charity and the business.”