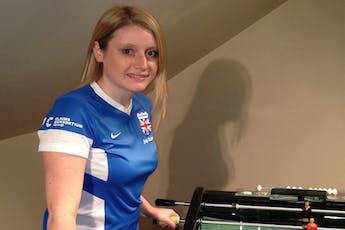 The 5-day event in Turin was broadcast to thousands of people via Table Soccer TV via live streaming with commentary and online footage on Kozoom.com.

Sadly the GB teams came home without any silverware, but will be keen to train up for success in the next world championships in 2017. The photograph shows Team GB’s women’s captain Jody Watling wearing the new sports kit.