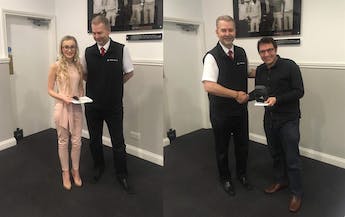 Claims Consortium Group’s Loretta Lashbrook and Joe Brooks have been recognised for their achievements by the Young Professionals Group branch of the Chartered Institute of Insurance (CII).

The Young Professionals Group (YPG) awards were held at Exeter Football Club on Friday 27 April, celebrating the achievements of young people in the industry throughout the last 12 months.

Loretta scooped the Young Achiever award for her commitment to learning. She originally joined Claims Consortium as an apprentice, and has since studied for and passed both her NVQ and CII qualifications, becoming a permanent member of staff.

Joe was awarded the Digital Innovation award, recognising his innovative and enthusiastic approach to helping others at Claims Consortium study for CII qualifications. Joe is known for being a key motivator and driver behind dozens of claims handlers passing their CII qualifications.

Debbie Mawer, Director of People and Culture at Claims Consortium, said: “Getting external recognition for your achievements is incredibly motivating, and both Loretta and Joe thoroughly deserve these awards. The CII has great standing in the insurance industry and we are grateful for their support and the opportunities they give our staff.

“These awards underline the personal commitment of these young people to furthering their careers and the contribution they make to our business, which makes me very proud.”