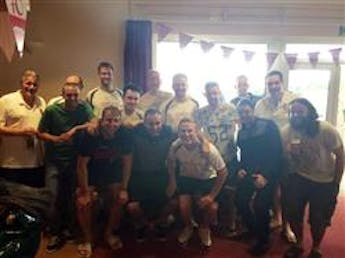 But despite a brave fight from Property Consortium, Tesco Insurance was the close winner of the shield – by just 15-1 .

The challenging 90-minute match was held in Taunton Vale earlier this month, in what is set to become a yearly fixture. .

The Taunton bout was a rematch following the first game between the two companies held in Newcastle in 2012, which Tesco also won.

It was an intense match and we worked very hard but, despite a brilliant early goal from our teammate James Kelland to level us up early in the first half, we just couldn’t outdo Tesco this time.

“It’s always great to have the challenge of such an able team to play against as it keeps us training hard. We’re determined to win the shield next time.”