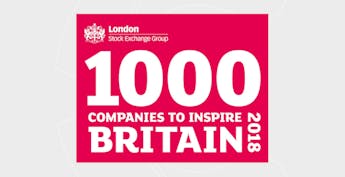 Claims Consortium Group has been listed as one of the 1000 Companies to Inspire Britain.

The 2018 list was announced at the London Stock Exchange on Tuesday 15 May, and has included Claims Consortium for the third time in the list’s five-year history.

1000 Companies to Inspire is London Stock Exchange Group’s celebration of some of the fastest-growing and most dynamic small and medium-sized enterprises (SMEs) in the UK and Europe.

Jeremy Hyams, CEO of Claims Consortium, said: “It’s always welcoming when an independent organisation selects your business to appear in such a prestigious list alongside many other incredible businesses. I’m very proud to have made the list this year, and thankful to a great team that has made it possible.”

Claims Consortium attended the launch ceremony in London, where keynote speaker was Chancellor of the Exchequer, Philip Hammond. There were 62 businesses across the South West included in the list

As well as identifying 1000 companies, the annual report examines in detail the opportunities and challenges facing SMEs and looks at the sectors and trends that will shape the future of the British and European economies.