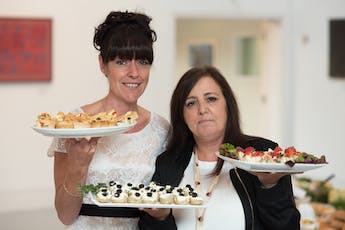 Claims Consortium Awards celebrate the best in staff and suppliers

The very best in staff achievement has been recognised in Claims Consortium Group’s first annual awards. We celebrated a record year with a fun-packed award ceremony at Taunton’s Brewhouse theatre and arts centre on 9 September.

The evening featured 17 awards in total, including six awards for firms in our supplier network. Big winner of the evening was the company’s Learning & Development Team Leader Rob Chilcott, who was handed the overall Commendation Award.

More than 240 staff and suppliers attended the event and enjoyed a buffet meal and disco as part of the celebration, with award-winning comedian Stephen Grant as compere. The night also featured the first public performance of the Claims Consortium band, which is producing a song to raise money for another of its charities, Stand Against Violence.

Jeremy Hyams, CEO at Claims Consortium Group, said: “There have been so many great achievements from staff at all levels of our business over the past year. Our judging panel had a tough time shortlisting, let alone picking the winners on the night.

“We’ve also recognised the suppliers to our company, which are often the front line for customer service when representing us and our insurer clients. I’m incredibly grateful for the commitment of everyone that is helping to make us one of Taunton’s fastest growing businesses.”