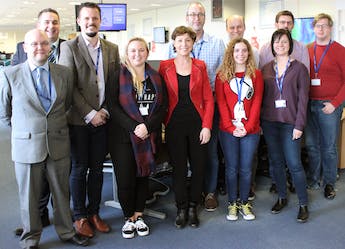 Taunton Deane MP Rebecca Pow has described Claims Consortium Group as a ‘benchmark’ for the region’s businesses, which has also been recognised through its recent Investors in People Gold standard award.

The Gold award puts the company in the top 1.5% for world-class business performance through its people. The news comes weeks after we announced a significant business win, and the creation of more than 100 jobs through 2015.

Rebecca Pow met with the company’s managing director, Matt Brady, to learn more about its achievement in the Government-owned standard, which puts the firm among an elite group of only 300 businesses in the UK.

She said: “Claims Consortium is an example of a growing business that has the formula right. They care about their people as much as they care about their customers, and they are setting the benchmark for all businesses to aspire to in the South West.

“It is clear to me that valuing your employees and achieving commercial success go hand in hand. Creating high quality employment opportunities like this is a boost for Taunton Deane and is also attracting talent from all parts of the country to Somerset.”

Claims Consortium has held an Investor in People (IiP) award since 2009, and because of its growth in staff, and the requirements for training, motivation and benefits that this entails, chose to work towards the highest available standard for people management.

The Gold award follows an assessor’s report that described the enthusiasm that people have for their work and for the company as “quite amazing!”.

It stated: “Very rarely during the course of my work with Investors in People have I come across an organisation that really does ‘put people first’. It feels like you have become ‘turbocharged’ with taking forward some excellent people practices, but in ways that are well thought through and have engaged your teams, which will ensure that they can sustain your growing organisation and help you to achieve your ambitious vision.

“Staff are professional in their work and achieve high levels of performance, but they have fun doing that.”

Carly Eggar, Head of Accreditation and Certification at Claims Consortium, said the award was recognition of the vast amount of energy and effort put into the business by both management and staff.

She said: “The audit of the company lasted for four full days and as well as reviewing our practices and processes they interviewed 37 staff. The comments by the assessor are incredibly heartening, and reflect our positive working environment perfectly.”

The IiP ‘best practice’ standard is managed by the UK Commission for Employment and Skills, and is licensed in more than 70 countries.